Home » Reviews » This Week’s Book Review – To Rule the Skies

This Week’s Book Review – To Rule the Skies 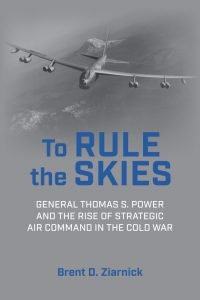 Thomas S. Power, the Strategic Air Command’s leader in the late 1950s and early 1960s was easily caricatured. The ultimate bomber baron, he was routinely mocked as a warmonger. Dr. Strangelove’s General Buck Turgidson was a parody of Power. After retirement, to ease the path of the fighter mafia in taking control of the Air Force, its establishment tacitly supported criticism of Power.

Power came from an immigrant family in New York City. Ziarnick traces Power from these origins to his eventual rise to command. Power never attended college, and may not have graduated high school. He scrabbled his way into the Army Air Corps studying to be a flying cadet at night, working construction during the day.

In the Army Air Force he proved a reliable, if unspectacular officer.  His career took wing only after taking command of the 314th Bombardment Wing, one of four B-29 wings assigned to Curtis Le May’s 20th Air Force. Power and his staff developed a study showing low-level area bombing using incendiaries would be effective against Japanese cities.

The report led to Lemay ordering the first fire bombing raid on Tokyo, which Power led. Fire-bombing led to victory over Japan, and Le May higher command. Le May pulled Power after him, with Power as Le May’s deputy and successor at the Strategic Air Command.

Ziarnick shows the stereotype of Power as Le May’s hatchet man is unfair and inaccurate. Power was a demanding superior, but one surprisingly and often capable of mercy. He never asked more of his subordinates than he asked of himself.

Ziarnick’s biography also belies the caricature of Power as an unimaginative Neanderthal. Power was one of the first advocates of ICBMs, and an imaginative advocate of an armed military presence in space. Power was the ultimate advocate of peace through massive superiority. He was also advocated avoiding small wars unless absolutely necessary.

“To Rule the Skies” is a remarkable and sensitive biography of a man who commanded the Strategic Air Command in its most critical years. Power’s story has relevance today.