This Week’s Book Review – That Was Now This Is Then 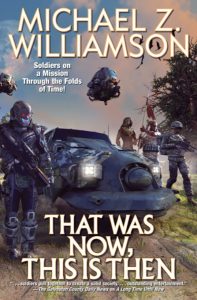 A Return Trip to the Past and Future

In Michael Z. Williamson’s novel “A Long Time Until Now” First Lieutenant Sean Elliott and nine US soldiers traveling in a convoy in Afghanistan suddenly found themselves flung into the Earth’s Paleolithic Age. Other time-displaced people from throughout history were with them. All had been accidentally displaced through a time travel experiment conducted by the Cogi, people in the far future. The Cogi eventually rescued them.

“That Was Now This Is Then,” by Michael Z. Williamson picks up the story after the soldiers’ return.  Some have been discharged; others remained in the Armed Forces. All are trying to pick up their lives.

The Cogi and the US Military want the help of the previous set of US time trippers to return the displacees to their proper times. It turns out if you have been there before going back causes less displacement than sending folks who have never been there.

This time the trip is voluntary. Not all the original group is interested in another free trip to the far past, even if they know they will return this time. But Elliot pulls together enough to make the mission work. To fill out the team two anthropologists are added. Their stated role is to help the team with the Neolithic inhabitants. They are also there to spy on the Cogi and discover their secrets.

As with the previous book, the adventure takes the time travelers into the distant past and into the far future. They are working with the Cogi this time, which makes things easier. Another difference is that not all of those displaced in time wish to return to their original time.  The soldiers they are sent to rescue were less successful, and have assimilated with the natives.

This story is at least as much fun as “A Long Time Until Now.” If anything, this story is more interesting. The previous book’s focus was survival. “That Was Now This Is Then” is more of a detective story. Who are the Cogi? What time are they from? With this book, Williamson has written another entertaining novel.