Home » Reviews » This Week’s Book Review – Prisoners of the Castle

This Week’s Book Review – Prisoners of the Castle 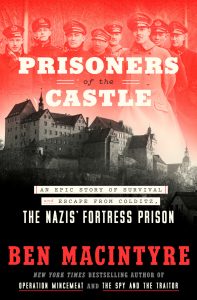 A New Look at Colditz

Colditz was a World War II prisoner of war camp run by Germany. It was the place incorrigible escapers and special political prisoners were sent. It is one of the best known German POW camps, thanks to one escaper, P. R. Reid. Postwar he wrote a book about his exploits, giving birth to a genre of escape literature about Colditz castle.

“Prisoners of the Castle: An Epic Story of Survival and Escape from Colditz, the Nazis’ Fortress Prison,” by Ben MacIntyre is the latest edition to the canon. MacIntyre takes a fresh look at the castle adding new research to previously published sources. Can anything be added to the story? The answer is yes.

Time has distanced us from the events at Colditz during World War II. The participants are all dead. The Iron Curtain, which separated those writing about the story from where the story took place, has fallen allowing free Western access to Colditz castle. MacIntyre takes advantage of all of this to provide an unparalleled look at what happened.

His story is less British-centric than the earliest books, written by British escapers like Reid and Airey Neave.  While these writers mentioned the Poles, French, and Dutch contingents, they served more to provide color than as central players. MacIntyre provides a more central role for the non-British contingents.

He also integrates German accounts of the prison with the Allied story. It becomes easier to see the events as a whole, understanding the moves and countermoves on both sides. MacIntyre also expands on other aspects of the story. He brings the political prisoners at Colditz into the mainstream of events there.

More interestingly he reveals an Allied espionage ring being run out of Colditz. At least one prisoner established relations with a German resistance ring (including a romance with a pretty local woman). It sounds like a mash-up of a bad espionage novel and Hogan’s Heroes, yet it happened.

He also reveals the unvarnished side of the Colditz story. The personal and less-desirable foibles of the participants are revealed. Snobbery and class-consciousness was rife, complete with the establishment of a Colditz branch of the Bullingdon dining club.  (Douglas Bader comes off particularly badly, blocking the early repatriation of his orderly for selfish reasons.)

If you thought you knew the Colditz story, read “Prisoners of the Castle.” MacIntyre provides a book filled with fresh revelations in a tautly-written and exciting history.