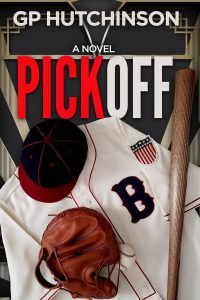 Baseball and Bootleggers in the Roaring Twenties

It is 1927. Prohibition is on and the stock market crash is in the future. Joe Rath is a catcher for the National League Baltimore Beacons.

“Pickoff,” a novel by GP Hutchinson, opens with Joe heading off for the ballpark to join the team for a road trip to Chicago.

Joe is a family man, with a young son and a wife he dearly loves. His wife, Mena loves Joe, but is less thrilled with his peripatetic career. She believes being married means being with your family, not haring off on long road trips. She wants him to quit.

Joe loves baseball almost as much as he loves Mena, but is considering quitting. The Beacons’s starting catcher last season, he has been demoted to second string. Frank Walsh was brought in to give the team a Babe Ruth-style slugger.

The ability to hit homers is all Walsh has recommending him. He is a drunk, a poor fielder, and not a team player.  But Walsh is playing while Joe rides the bench. Worse, once in Chicago Joe learns the unhappy Mena has gone to stay at her mother’s taking Joe’s son.

After the first game ends, Pinky Weiss, another Beacons ballplayer and Joe’s best friend on the team, drags the glum Joe off to a speakeasy. The place is owned by a cousin of Lou D’Amico, another member of the Beacons roster. Joe, Pinky, Lou, and Tony Coppola, another ballplayer and Lou’s buddy, are off to Al’s Place.

There, Joe hears Amie Dawes. A torch singer, she impresses him singing Gershwin’s Someone to Watch Over Me. The next day, after the ballgame, his three buddies drag the reluctant Joe to a party at the house of Gyp, Lou’s cousin. There he encounters Dawes again. He discovers she has become Gyp’s unwilling possession. Gyp is unscrupulous and possessive, a Chicago gangster.

Against his better judgement Joe becomes involved with Dawes, helping her escape Gyp. This endangers Joe’s life, and also puts his shaky marriage at risk. But Joe is a decent guy and cannot leave Dawes in the hands of a violent thug.

“Pickoff” is a fast-paced novel. Its depiction of 1920s baseball is first-rate. It takes readers into the game and into the lives of the players in an era when it was a working class sport.  It layers on a battle with the mob, which builds to an explosive climax.