This Week’s Book Review – Murder on the Golden Arrow 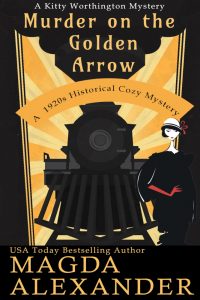 A Return to the Golden Age British Mystery

It is 1923. Kitty Worthington, completing a year in a Swiss finishing school is, returning to England for her debut year as she turns 21. An unmarried young woman of the upper classes cannot travel alone, so she is accompanied by her very stuffy older brother Edward.

“Murder on the Golden Arrow,” by Magda Alexander opens with Kitty discovering Ned may much less stuffy than Kitty believed. She learns he had a paramour. Worse, traveling on the Golden Arrow from Dover to London the woman is poisoned. While sitting across from Kitty and Ned.

A Scotland Yard Detective Inspector aboard the train, Robert Crawford, takes charge of the investigation. Since Ned gave the poisoned woman medicine immediately before dying Kitty fears Crawford suspects Ned. The dead woman was blackmailing Ned. Kitty knows Ned did not commit the crime, but he seems the obvious suspect.

She believes Scotland Yard will focus on the obvious suspect, Ned will end up hanged for a crime he did not commit. She decides to solve the crime herself, lest the guilty party get away.  She has never investigated a mystery before, let alone solved one. Investigating constitutes interfering with a police investigation. Not letting these things deter her, she plunges in regardless.

Kitty feels smothered by 1920s upper-class conventions. Her mother’s desire for Kitty to find a noble husband leads to comedy. But Kitty also learns as the book progresses that her family does not conists of one-dimensional cutout characters of her expectations. Nor are they as bound to convention as she believes. She discovers that neither her investigation, nor the behavior of Scotland Yard detectives follow the stereotype set in the detective fiction she has read.

Those who read and enjoyed Rhys Bowen’s Royal Spyness series or the Peter Wimsey mysteries will probably enjoy this book. It is set in the same time period and same social setting in post-World War I England. Alexander may not be a deft as Bowen or Dorothy Sayers, but this book has the same mix of status and whimsy as the other books. Crawford is cut from the same mold as Sayers’s Charles Parker. While Kitty is neither as sophisticated nor worldly as she imagines herself, this adds to the book’s charm.

“Murder on the Golden Arrow,” is a delightful first novel in a promising new series. Intended as a light fun read, it delivers on that promise.