Home » Reviews » This Week’s Book Review – Ghosts of the Past

This Week’s Book Review – Ghosts of the Past 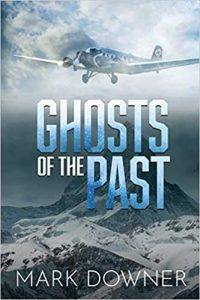 On March 22, 1945 Major Max Hignite flew his last Luftwaffe mission; a flight to Switzerland in a Ju-52 loaded with artwork stolen by the Nazis. The plane crashed, sealed in a cave by a Swiss lake. Hignite, badly injured, survived. Rescued by local Swiss, he spent months near death in a hospital. By the time he recovered, the Ju-52 had disappeared. Only Hignite was aware of its contents. He decided to move on with his life.

So opens “Ghosts of the Past,” a novel by Mark H.Downer. Moving on included going to the United States after the war ended, joining family who immigrated to the US in the 1930s. In spring, 2001, Hignite is dying. He passes his final flight’s secret to his favorite grandnephew, Matt Ferguson. Matt inherits the aircraft’s manifest cargo and a map showing where it crashed.

Matt, in a well-paying but dull job, decides to recover the treasure as a one-off adventure. Since he is Max Hignite’s executor, Matt uses settling his grand-uncle’s estate as an excuse to take a leave of absence.

Yet the path to this legacy proves peril. Uncle Max was under observation by former SS members. They intended the cargo as part of the means to finance their post-war escapes. Their escape network to hide their identities has grown into a powerful and wealthy crime organization. Matt inadvertently used one of their agents to translates Max’s writings to English. They are now after Matt.

Worse, a drug cartel also learns of the discovery. They also want the money they can get selling the paintings. Getting Matt is the first step to finding the Ju-52.

Both groups of criminals will and do kill. Matt escapes one attempt through good fortune, only to stumble into an attempt to kill art historian Courtney Lewis (who helped identify the paintings and whom Matt suspected sent the first assassin on him).  Soon she and Matt are off to Switzerland one step ahead of two competing criminal gangs – and the police, for whom Matt and Courtney are subjects of interest in the murders.

“Ghosts of the Past,” has a few bumps (including a somewhat deux ex machina ending). Yet Downer has written an exciting thriller. Readers will forgive its few weaknesses, given its fast-paced, virtually non-stop action mixed with a dash of romance. It is a fun read, set in the carefree months before the September 11 attacks changed everything.