This Week’s Book Review – From the River to the Sea 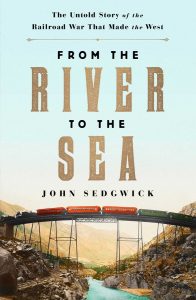 A Tale of a Real Shooting Railroad War

Railroad rivalries played a significant role in nineteenth-century US history. No rivalry was as intense or bitter as the one between the Atchison, Topeka and Santa Fe and the Denver and Rio Grande railroads.  At times it erupted into actual gunfire.

“From the River to the Sea: The Untold Story of the Railroad War That Made the West,” by John Sedgwick tells the stories of their battles. The stakes were high. The winner could gain access to the Pacific. Could, rather than would because other railroads sought to block the winner from advancing.

Sedgwick frame the story as a personal duel between two individuals: General William J. Palmer and William Barstow Strong. Palmer, a Civil War hero, had relocated to Colorado to build the Denver and Rio Grande Railroad. Strong was the corporate-minded manager of the Santa Fe. Both men had a vision of driving a railroad to the Rio Grande River and from there west to the Pacific Ocean.

As Sedgwick shows the path to each man’s vision crossed a narrow passes where there was room for only one set of tracks. He also shows how the romantic Palmer and the pragmatic Strong personalized the rivalry. They eventually began taking actions more to one-up their rival than to benefit the railroads they ran, even taking their battles into Mexico.

Their fight is set against the backdrop of the nineteenth-century American West. Sedgwick explains how the railroads changed where they traveled. Cities and farms bloomed along the path of the railroads, while bypassed towns and resources withered away. So did the law. Indeed, one of the book’s fascinating revelations is how the railroads used the legal system to protect themselves and defeat their rivals.

Sedgwick also explores the personalities involved. His cast of characters include Collis Huntington of the Central Pacific,  Leadville Mayor and silver magnate Horace “HAW” Warner,  financier Jay Cooke, and industrial magnate Jay Gould. These men alternately fought with and allied with Palmer and Strong and each other.

The result is a kaleidoscopic book, one that carries its readers from coast to coast, as its author shows readers how the pieces all fit together to create today’s modern America, how linking the Mississippi to the Pacific shaped this country.  Better still, he draws interesting parallels between today’s tech barons and the nineteenth centuries railroad barons.  “From the River to the Sea” is a book that fascinates and informs.