Home » Reviews » This Week’s Book Review – Einstein on the Run

This Week’s Book Review – Einstein on the Run 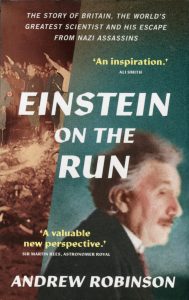 A Famous Scientist and his British Fans

Albert Einstein was one of the twentieth century’s great men, vying with Winston Churchill for the title of “Man of the Century.” In addition to relativity, he was an accomplished musician and a noted pacifist. He was an Anglophile. He was also an assassin’s target in the 1930s.

“Einstein on the Run: How Britain Saved the World’s Greatest Scientist,” by Andrew Robinson tells two tales. It explores the admiration Einstein and Great Britain mutually shared. It shows how the British offered Einstein sanctuary at the scientist’s moment of greatest peril.

The book is also a biography of Einstein, but it is a focused biography. It recounts his life in the context of his relation with Britain. It shows how British physicists, most notably Sir Isaac Newton and James Clerk Maxwell, shaped Einstein’s scientific studies, and fostered an admiration for British scientists.

Robinson also shows the role British scientists played in both verifying and publicizing Einstein’s theory of Special Relativity. He reveals the relationship between Arthur Eddington and Einstein, both pacifists during World War I. Eddington’s 1919 eclipse observation led to Einstein’s first invitation to tour British Universities,

The book shows how the rise of Hitler led to Einstein’s becoming a pariah in his native land, due to Einstein’s Jewishness, his pacifism, and his opposition to National Socialism. That Einstein was the world’s most famous and favorably thought-off German increased the Nazi’s dislike of him.

The inevitable happened in 1933. While Einstein was visiting Belgium, the Nazi government seized all his assets, leaving Einstein an impoverished exile. Einstein’s support of the Brown Book, whose publication revealed Nazi excesses, led extremists in Nazi circles to plot Einstein’s assassination.

Belgium was too close to Germany for safety. Then England offered him refuge.

Robinson examines the most unlikely man who orchestrated Einstein’s rescue, Commander Oliver Locker-Lampson. In the 1920s Lampson had been an admirer of Hitler and founder of a quasi-fascist Blueshirt movement in Britain. Yet his English sense of fair play reversed this and Lampson initiated sanctuary efforts.

Einstein would later resettle at Princeton in the United States, yet his 1933 stop in Britain was a catalyst. He abandoned pacifism against the Nazis, to join the antinuclear proliferation movement after World War II. (Robinson reveals he was also anti-Communist, refusing to visit Soviet Russia.)

“Einstein on the Run” is an intriguing book, well worth a read. It offers a look at rarely-examined aspects of Einstein’s life.