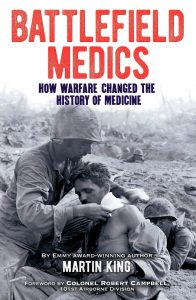 “Battlefield Medics: How Warfare Changed the History of Medicine,” by Martin King, tells that story. He starts at the origins of battlefield medicine and traces its progress through the present. He also shows its impact on all modern medicine.

The story starts in Ancient Egypt. Pharaoh’s armies had an organized medical service. The treatments of the day were limited to first aid, herbal medicine, and a lot of prayer. Surgery was rarely attempted. Dissection lay in the future.

From there King carries the tale forward. The first half of the book examines battlefield medicine prior to the twentieth century. He shows the contributions the ancient Greeks and Romans made through Hippocrates and Galen (who advanced wound treatment). He presents the Middle Ages and the emergence of the barber-surgeon. (The same guy who cut your hair tended your wounds.)

He shows how battlefield trauma medicine began entering modern times when men like Ambroise Paré appeared, with scientific knowledge added by Andreas Velalius and William Harvey. From there he traces the appearance of the military hospital, and the inclusion of surgeons on the rolls of warships and military units.

Battlefield surgery arrived with Dominique-Jean Larrey in Napoleonic France, and evolved throughout the nineteenth century.  King discusses the influence of Florence Nightingale, Clara Barton (and the Sanitary Commission) and Henry Dunant (who founded the Red Cross).

King spends the remaining half of the book in the twentieth and twenty-first centuries. It is an appropriate split, because medical technology, including battlefield medical technology grew at an astonishing rate after 1900. Care soldiers of the First World War received was far superior to that experienced in the wars of the mid-1800s.

“Battlefield Medics” is a whirlwind trip through trauma medicine’s history.  King shows the symbiotic relationship between modern civilian trauma medicine and battlefield trauma treatment since World War II in this book. It will fascinate those interesting in medical and military history.