Home » Made by Members » Mind if I Plug My Latest Book?

Mind if I Plug My Latest Book? 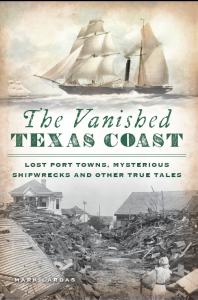 People associate Texas with cowboys and cattle, cotton and oil. Today Texas is high tech: the Telecom Corridor in Dallas, computers in Austin, NASA in Houston. Many think of it as a product of its land.

Yet Texas has always been influenced by the sea. For 350 years the sea carried Texas history. It brought explorers, castaways, pirates, empresarios, immigrants, and cargoes. It carried away Texas’s agricultural goods, bringing wealth to the state. Before the railroad and telegraph the sea was the quickest way to communicate with the state or for the state to communicate with the outside world.

From Texas’s discovery in 1519 until after the American Civil War in the 1870s the easiest way to reach Texas was by sea. Swamps guarded its eastern approaches, as did arid plains to its north. Inhospitable deserts shield its southwest and west frontiers. The only easy access to Texas came through the Gulf Coast on its southeast. Even after that, the sea has continued to exert its influence on Texas, whether through shipbuilding, Texas and Texan contributions to the US Navy in two World Wars or through being the headquarters of the world’s largest merchant fleet. Then, too, there have been multiple maritime-related disasters on the Texas coast, man-made or natural.

This maritime history is largely forgotten today. Most of today’s Texas cultural memory is landlocked. Its past is a tale of cowboy and trail drives, journeys on horseback or aboard the iron horse. Its present is associated with oilfields, high-tech industry, and cutting-edge medicine. Its maritime heritage has faded to invisibility, faded and ghostlike. The Texas Rangers are remembered; the Texas Navy is forgotten. Space captures the imagination, not shipping.

But you can read about it in my new book, The Vanished Texas Coast, released and available to the public on July 12, 2021. You can get it at Amazon, Barnes and Noble, Arcadia Publishing or bookstores throughout Texas.