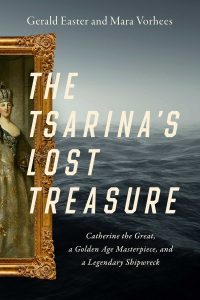 In 1764 Tsarina Catherine the Great of Russia started a major war in Europe. It was a culture war. She collected fine art as aggressively as she fought on the battlefield. It spurred Europe’s crowned heads, especially Louis XVI of France and Frederick the Great of Prussia, to compete at obtaining and displaying art, especially fine paintings.

“The Tsarina’s Lost Treasure: Catherine the Great, a Golden Age Masterpiece, and a Legendary Shipwreck,” by Gerald Easter and Mara Vorhees, records a casualty of that culture war Dutch Master paintings purchased at auction for Catherine the Great were sent from Holland to St Petersburg aboard the Dutch merchantman Vrouw Maria. Caught in a storm, the ship sank off the Finnish coast.

The book uses the shipwreck, to frame the story. Among the paintings lost was Gerrit Dou’s triptych The Nursery. Largely forgotten today, Dou was then the most admired Golden Age Dutch Master. (One of Dou’s paintings hung in the Louvre next to the Mona Lisa.) The Nursery was considered Dou’s finest work.

A few paintings were salvaged. Dou’s masterpiece remained in the ship’s hold. Eventually salvage was abandoned. The ship was largely forgotten as time passed – as was Dou. His teacher, Rembrandt, changed from the man who taught Dou to paint to the supreme Dutch Master.  Then in 1999 a Finnish wreck hunter rediscovered the wreck, upright and perfectly preserved.

This book takes readers on multiple voyages of discovery beyond the discovery of the wreck. It explore the world of Golden Age Dutch painting, bringing Gerrit Dou to life, explaining his Eighteenth century esteem. It examines Eighteenth century art collecting, showing how it evolved from a pastime of merchants into a royal obsession. It surveys European politics and the rise of Russia. It reviews the study of art history and art criticism from the Dutch Golden Age to the present.

The authors then move to marine archaeology, describing the discovery of Vrouw Maria, and the efforts to salvage it. They take readers into the history of marine archeology, and how technology affects underwater exploration. They also look at how governmental bureaucracy can frustrate recovery of historical object for petty reasons.

“The Tsarina’s Lost Treasure” offer readers a fascinating tale. It wanders from field to field, holding readers at each long enough to maintain interest and wanting more, yet compelling them to move to the next. It is history at its finest.