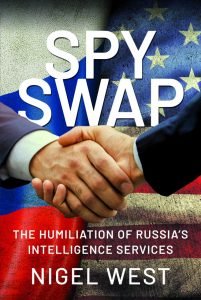 A Double Game with Double Agents

In 2010 the FBI rolled up a network of Russian spies living illegally and undercover in the United States. Press coverage focused on one spy captured, the exceedingly attractive Anna Chapman. They portrayed the illegals as a gang of inept klutzes, caught through their own carelessness.

“Spy Swap: The Humiliation of Russia’s Intelligence Services,” by Nigel West, tells a different story. It reveals the circle taken down in 2010 was extremely professional and highly dangerous. They had been under observation for over a decade. It also reveals the real reason the FBI chose to act in 2010.

To understand the context for the take-down and what motivated it, West presents a brief overview of spying by the Soviet Union and the KGB, and the subsequent continuation of spying by Russia after the fall of the Soviet Union and the KGB’s successor, the SVR. Readers of recent espionage history, like “Agent Sonya” and “Gray Day,” and others, will find mention of those activities in “Spy Swap.”

Those books are a placed in a context which makes inexplicable parts of those books suddenly understandable. Early chapters provide a matrix for understanding the espionage game between the first and second worlds before and after the fall of the Iron Curtain.

More fascinating is West’s description of the struggle between the US and Russian espionage and counterespionage services after the Soviet Union dissolved. He reveals how the US repeatedly penetrated Russian secret services and rooting out traitors within US ranks through intelligence gained from Russians.

The 2010 takedown of the agents was the culmination of a 10-year surveillance code-named GHOST STORY. The FBI is revealed as a highly effective counterespionage service, patiently tracking a network of agents, to be rolled up at need.

The need proved surprising. The Russian convicted Gennadi Vasilenko, a Russian intelligence agent caught cooperating with the US. His imprisonment was sufficiently harsh the US feared he would not survive his term. The Russians did not understand how valuable he had been to the US. The GHOST STORY agents allowed the US to arrange a spy swap in which Vasilenko was included, but as if an afterthought.

“Spy Swap” reveals a time in which the US was loyal to its foreign human assets and going to extreme lengths to recover them. It documents a time when the US intelligence and counterintelligence dominated its Russian rivals, in a manner humiliating to their Russian counterparts.