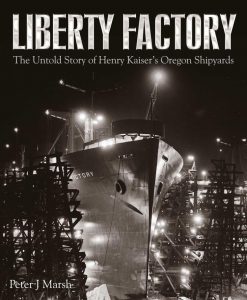 When Portland Built Ships by the Score

Before Portland, Oregon became the upscale city mocked in Portlandia, it was a down-at-the-heels lumber town and port hard hit by the Great Depression. Its transformation began in World War II, when Portland and its cross-river companion, Vancouver, became major shipbuilding centers. Henry Kaiser established shipyards in the two cities.  These produced ships by the score: Liberty ships, Victory ships, escort carriers, troop transports, and tankers. The wartime shipyards turned Portland into an industrial powerhouse, financing its future prosperity.

“Liberty Factory: The untold story of Henry Kaiser’s Oregon shipyards,” by Peter J. Marsh, tells the story of that transformation. Marsh reveals how Portland acquired the shipyards, and chronicles their activities during World War II. Along the way these shipyards produced over 700 ships. Big ships – all displaced over 10,000 tons.

Marsh shows why Henry Kaiser chose Portland for the location of two major shipyards and Vancouver for a third.  Marsh shows how the shipyards were built – all within months. As Marsh shows, this included more than building the manufacturing centers. Kaiser also built the offices these shipyards needed and housing, child care centers, and hospitals for its workers.

Marsh also looks at Henry Kaiser and the industrial empire he built during the 1930s. Marsh shows how Kaiser brought the innovations pioneered building the Hoover Dam and Kaiser’s other large-scale construction projects to shipbuilding. While Kaiser constructed major shipyards in California and Washington as well as in Oregon.

The book focuses on the three Oregon yards. Marsh provides a history of shipbuilding in these yards. The ships built get thorough coverage. He looks at the building process, including the methods used to crank out ships at an ever-increasing rate. (One Liberty ship was built in ten days.) Yet he also spends time looking at the people who worked at these yards, who they were, what they did, and how they lived. He also examines the subcontractors in and around Portland who supplied the engines and fittings going into Kaiser’s ships.

“Liberty Factory” is lavishly illustrated. Many photos come from the collection of Larry Barber, who was the maritime editor of Portland newspaper, The Oregonian, for much of the mid-twentieth century. Marsh used Barber’s archives to research this book.

“Liberty Factory” is a fascinating industrial history, one as much about people as ships. It offers an absorbing look at Home Front America during World War II, and perfectly captures mid-20th  century America.