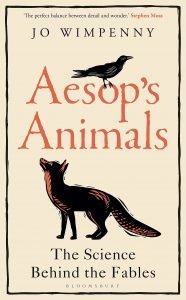 Zoology as Seen through Fable

We read Aesop’s Fables as children or re-read them aloud to our children. Their lessons resonate today. But how accurate are the depictions of the animals in the fables. Can crows add pebbles to a pitcher to raise the water level? Are wolves cruel and rapacious, foxes wily or donkeys stubborn and stupid? Could a tortoise beat a hare in a race?

“Aesop’s Animals: The Science behind the Fables,” by Jo Wimpenny, looks at the answers to those questions. Wimpenny, a zoologist turned writer approaches the answers through the lens of modern zoology.

In individual chapters she uses nine different Aesop Fables featuring animals as a springboard, examining the behavior of these animals and related species. In addition to the creatures previously mentioned, she also looks at dogs, lions, monkeys, and insects (The Ants and the Grasshopper). Each chapter is an excursion studying the behavior and history of the featured species.

A chapter contains several strands. Wimpenny presents the featured fable. She then dissects it, comparing the actual behavior of the highlighted animals to their behavior in the fable. Along the way she presents the animals’ histories.  She shows how dogs became the species most closely associated with humans, why lions are the only social feline among the large cats, and how and why donkeys differ from horses.

Several fables are surprisingly accurate. Crows are clever enough to put pebbles into a pitcher to raise the water level. Monkey see, monkey do is a phrase describing actual monkey behavior. (Wimpenny documents several monkey studies which showed how monkeys learned from each other or humans.) Animals do react to their reflections.

The fables also contain inaccuracies. Wimpenny shows how wolves get a bad rap in the fables. Nor does it matter whether a grasshopper saves up for the winter or not. It dies after a year regardless.

Wimpenny goes beyond looking at animals. “Aesop’s Animals” is also a study of zoology and its scientists. She presents the methods used by zoologists, and examines the controversies, contentions, and different approaches used both today and over time. It is as incisive a study of human behavior as of animal behavior.

“Aesop’s Animals” is a delightful book. Wimpenny approach is whimsical and amusing, but it is also fact-filled and highly readable. She is as accurate as she is entertaining. And yes, Wimpole does show how a tortoise could win a race with a hare.